When I decided I was going to post about Aristotle and Dante Discover the Secrets of the Universe, I went and grabbed my copy so I could thumb through it while writing, the way I usually do when I’m composing a post. But then, instead of just flipping through idly, I accidentally ended up rereading at least a third of the book. So now it’s a lot later than I’d like it to be and I’ve made very little headway on this post, but I couldn’t help it—Aristotle and Dante is just that good.

Aristotle (Ari, for short) and Dante are two Mexican-American teenage boys who meet and fall in love the summer they’re fifteen. Dante is aware of this happening. Ari is not. Ari has walled himself into and away from himself. He doesn’t let himself catch on, so, for a long time, they’re friends. They hang out, they invent ridiculous games, they smoke weed, they fight, they make up. They have conversations in dialogue that’s so real it aches. A lot of really intense stuff goes down that I won’t spoil for you, but through it all, they keep coming back to each other. And eventually, with a lot of help, Ari starts to dismantle his walls.

Benjamin Alire Sáenz is a poet, and in some ways, Aristotle and Dante reads like poetry to me, the kind of yearning, careful, guarded poetry that might pour straight from the soul of a mixed-up, kindhearted teenager like Aristotle Mendoza. The rhythms of Ari’s voice are just infectious—for a while after you finish this book, you’ll find yourself thinking in teenage boy poetry, too. Trust me, it’s a lot more fun than it sounds.

February was a tough month in Boston this year. Granted, it’s a tough month in Boston pretty much every year, but this one was particularly challenging. My eight-year-old self would be horrified to know I’m writing this, but eventually I really, really got sick of snow days. When every day there’s nowhere to go but your own kitchen, nothing to do but shovel, it gets old remarkably fast.

On those long cold afternoons, books were our only refuge, but many of them failed in the end, shattering against the implacable walls of boredom that towered above us. I threw down book after book that month in favor of pacing laps around the apartment; nothing could hold my attention long enough to quell the restlessness. Nothing, that is, except Everything Leads to You.

Everything Leads to You got me through blizzard number three. I read it in seven straight hours, lying on my stomach on the carpet with a cup of coffee and a blanket. It made me want to move to LA, become a set designer, and fall in love with the brilliant, beautiful, long-lost granddaughter of a Hollywood legend. If all air traffic hadn’t been grounded, I might have flown west that night.

I love Emi and Ava’s love story because it feels real, and it feels right. It isn’t simple and it isn’t easy, but nor is it overflowing with drama and angst. They’re just two people who find each other, work it out, and make it happen. Everything doesn’t tie up neatly, but it doesn’t need to, because they both know that the frayed ends are part of what make it true.

At the very beginning of Page by Paige, Paige Turner (her parents are writers) buys a sketchbook. She’s just moved from rural Virginia to Brooklyn and she’s feeling lonely and unmoored. But she’s always loved to draw, so she sets about following the rules her painter grandmother set herself a long time ago, starting with the first: “No more excuses! Buy a sketchbook and draw a few pages each week.” Maybe, Paige thinks, it will help.

And help it does. Over the course of her first semester at her new school, Paige, quiet and reserved on the outside, pours her loud, brilliant, and extraordinarily imaginative inner life onto the pages of her sketchbook, and eventually, it gives her the strength she needs to start sharing some of that inner life with the world.

At its core, this book is your standard realistic young adult novel. It’s about friendships and first loves and figuring out who you are and who you want to become. Paige deals with all the inescapable teenage joys of endless frustration and insecurity and awkwardness, and watching her navigate it all is delightfully entertaining. But Page by Paige sets itself apart with Laura Lee Gulledge’s gorgeous art and the brilliant way she waves the narrative of Paige’s story into the structure of Paige’s own drawings and inner monologue. It’s one of the best renditions I’ve seen of a young artist’s mind in progress.

Every once in a while, no matter how much you love books, you go through a reading slump. You know what I’m talking about—you pick up a book you’ve been looking forward to, one you’re absolutely certain you’ll like, and, for some reason, you just can’t make it stick. So then you try out another off your epic TBR pile, and another, and another. And even though you know, you know, you actually like the books, you just can’t seem to enjoy them.

First things first: forgive yourself. It happens to the best of us. Right now, it’s happening to me. And I’m here to tell you that there is hope. There is a solution, friends, and that solution is middle grade graphic novels. Other people will tell you to reread your favorites, to try short stories or comedy or edge-of-your-seat thrillers, and those are all solid suggestions. They’ve helped me through some tough spots. But in my experience, the best way to get yourself to want to read again is to pick up a book that doesn’t require a lot of reading at all.

So that’s what we’ll be posting about this month: our favorite graphic lit written for people at least ten years younger than we are. These are obviously great books if you happen to be twelve, but they’re also great if you happen to be 25, or 38, or 59 (or, you know, any other age) and just in need of a reading pick-me-up.

Nikki Grimes’s Bronx Masquerade is kind of the Platonic ideal of an ensemble book in my head. It’s about a series of distinct voices, each of them fascinating and fully realized on its own, but so much better when taken as a whole.

One day, in a classroom in the Bronx, one of the boys decides that, instead of writing his assigned essay about the Harlem Renaissance, he’s going to write a poem. Why, he wonders, would a person write an essay about Langston Hughes when Langston Hughes was all about poetry—plus, poems are way shorter to write. The (fantastic, tough-lovey) teacher obviously isn’t letting him get away with that. Instead he makes him read his poem out loud to the class. And thus begins Open Mike Friday, a weekly classroom tradition.

As the students in the class read their own poems out loud every Friday, they each find their own voices and they begin to understand each other and come together as a community. I know that sounds cheesy. But the book doesn’t feel quite so cheesy when you read it—each kid’s poem is distinct and troubling and perfectly pitched in its own way, and they fit together as an awesome, readable poetry slam.

Skim is written by Mariko Tamaki and drawn by Jillian Tamaki, the same cousin team who more recently collaborated on This One Summer, which Dana recommended a couple of months ago for our “Summer Reads” theme. Of course there are similarities, and I love both books, but Skim is a story of a different order: more intense, more mature, and much, much darker.

It’s narrated by Kimberly Keiko Cameron (aka Skim), a Catholic school tenth grader whose diary over the course of the school year forms the backbone of the story. It’s a big year (as are all years when you’re that age, I suppose), and as Skim struggles to figure herself out, not to mention everyone else, she’s confronted with everything from sexuality to suicide.

To say that Skim is a book about school is obviously a major oversimplification. But of the many wonderful young adult novels I’ve read that explore what high school is like for teenagers, this one is probably the most beautiful. And I’m not just talking about the gorgeous illustrations. 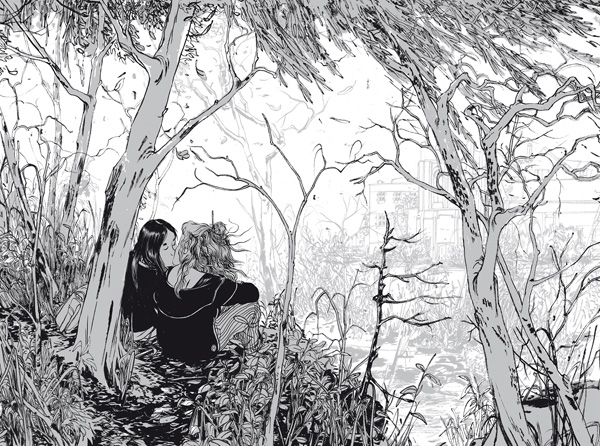 The more time I spend with this book, the more I appreciate its delicate, woven construction and raw, searching depth. And though I do wish I’d known to read it when I was in 10th grade, it has a resonance that’s impossible to outgrow. We all need the occasional reminder that being sixteen is really, really hard. 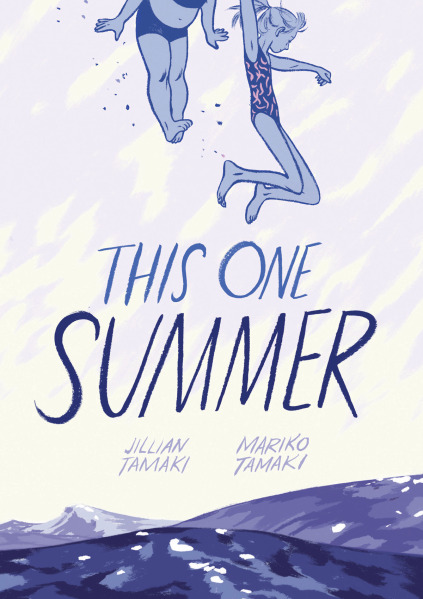 I got This One Summer way back when it was still horrible polar vortex winter, and I think it just made the winter all that much more painful. Not just because it’s warm and lake-beachy and full of characters who spend all day running around in their bathing suits. Not just because it added insult to injury by being a graphic novel, so I had to look at these gorgeous pictures of water and cabins in the woods and sunshine. 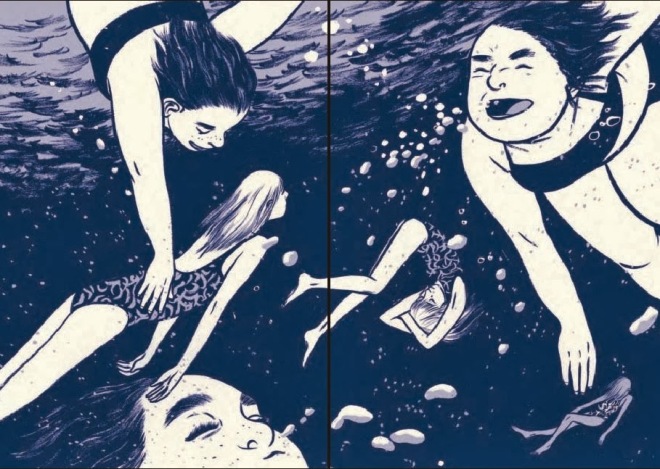 No, this is a book best read in summer because it’s about the way summer feels. Like a time for big questions, for tectonic shifts in the order of the universe. Everyone has that one summer when everything changed. 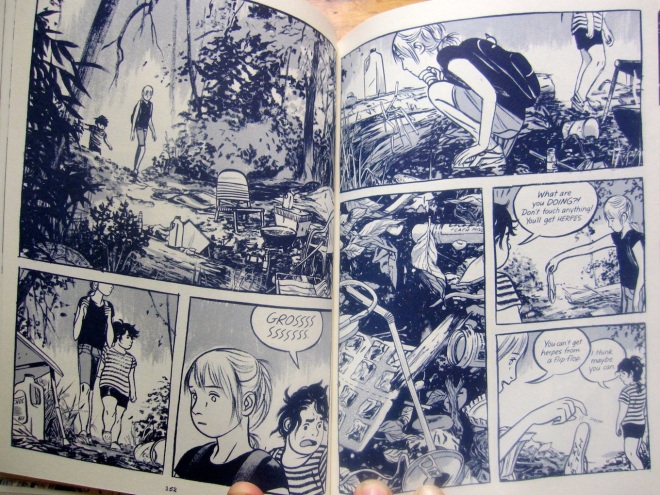 This One Summer is about Rose and Windy’s that one summer. Rose has been going away to Awago Beach with her parents every summer for as long as she can remember. She’s always spent her summers playing with Windy, the slightly younger, slightly quirkier girl next door. But this summer Windy seems so much younger all of a sudden. And Rose’s parents aren’t getting along so well. And the girls’ usual summertime spying is more fraught than usual.

This book could feel mostly just nostalgic for childhood summers on the beach, but there’s more than just nostalgia here. This One Summer captures the magic of summer, yes, but it also captures the way summer, because of the way it’s set apart from the rest of the sloggy slushy year, throws those growing-up moments into sharp relief.

Meanwhile, elsewhere on the Internet...